Well, despite the fact that the PG Astray is dropping in a little over two weeks, I’ve jumped into building the PG W-Zero Custom.  Depending on how the build goes I may stop to build the Astray first if I don’t finish this in the next two weeks.

In terms of PG difficulty, at first look, I’m going to have to rate this up there with PG Zeta Gundam.  For the record, I consider PG Zaku (outside of some fitness problems with some part) and  PG Strike to be on the easy side of the PG spectrum, while rating PG Zeta at the hard end of the spectrum.  I also imagine that PG GP01 would also be hard, and that’ll most likely be the last PG I’ll build.

The PG comes in a large box, the same size as Ex(s)-Gundam or Strike, and consists of 30 runners, plus 18 die-cast parts, 14 individual feathers for the wings, plus springs, wires, and a whole lot of screws for a total of near 700 parts and pieces.  In other words, something that is not going to get done in a few days.

All unwrapped and ready to go 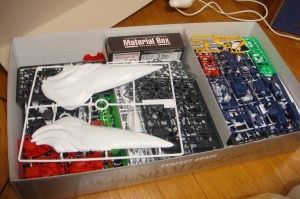 Contents of the materials box 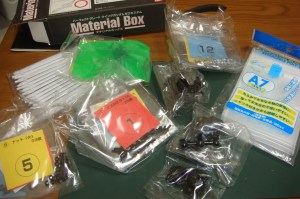 All the individual screws and stuff 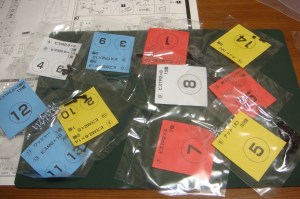 You may notice the blue A7 bag in the middle picture, these zip lock bags will be used to keep the screws and stuff in so I don’t lose them.  Bandai at most will give you one extra screw, but mostly they don’t, so you don’t want to lose your parts.  I picked up the zip lock baggies at the 100 yen shop (the dollar store back home).

Starting right off with the arm and shoulder, in the first picture I have the internal frame of one arm finished, shown in the bottom left, along with the shoulder.  The parts around the completed arm is used to complete the next arm.  While it seems just strewn about, the parts are actually arranged in the order they need to be built, clockwise.  The shoulder is attached via screws, so you have to slide on the armor before screwing the shoulder to the arm part.  The second picture shows the forearm armor attached, and that’s as far as I got last night. 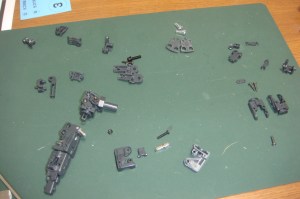 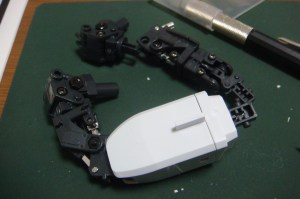 I cleaned up the sprue nubs from the two white pieces, but there is a somewhat noticeable seam on the forearm.  Most likely that can’t be helped due to the size of the piece.  I don’t really worry about cleaning up sprue nubs from the internal frame, because you’re not going to see it once the armor is put on.