So it only took about 5 weeks to complete one HG kit.  At this rate, my backlog is going to take years to finish.  Anyways, while later than the rest of the crowd, here are a few pictures.  I didn’t bother with the weapons since I’ve already got like 5 beam rifles and Gundam Hammers from other kits.  This Gundam is doing nothin but pimpin 7-11.  Anyways, tackling one kit at a time!

Well, they say that pictures speak a thousand words, and I’ll let the below do exactly that.  But if I had to sum it up “Beautiful in Blue” would probably be how I’d do it.  To best honest with you, I’m going to have a hard time going back to the regular red/pink color…  While a costly kit, it’s very well worth it if you are a fan of either the Unicorn, gentei kits, or the color blue.  Or all three, whatever works right.  The downside is this kit will be hard to get….

Today we’re going to take another look at something else that showed up in the mail, and I have given you a slight hint at a while ago.

Yep, Char attacks, with the gentei limited Char set that was part of the goods line up at the Nagoya Gundam Expo last year. How’d I get to Nagoya for that one? Actually I didn’t, this a tale of learning how to dive into 2 chan for info when you need it. Basically, as some of you may heard, Bandai decided to not set a limit of how many kits you could buy at this event, and well, people went nuts apparently. It was reported that some people were buying 10 of the same kit and so on, for scalping, friends, or whatnot, and Bandai managed to sell out of their stock on day one. Well, in a move that only would probably happen in Japan, Bandai was nice enough to allow event goers the chance to order the sold out items to be delivered at a later date. Of course, to keep it to those who actually showed up, they gave out passwords to access it.

Well, you immedietely had people auctioning off the card on Yahoo Auctions, but a quick check on 2 chan revealed the password (which was like GundamNagoya, or something like that, nice hard password there). So a quick check online and I made my order for the Char set. It’s to be noted that they did the same for the Gundam Expo that was held in August, and will do it again in the future when you stop to think about it. Could be a good way for a reseller to make a killing on getting some of those limited goods out of Japan, but the only downside is they give you an extremely limited window of opportunity for odering. I wonder as well if they would fill an order for say 20 or 30 of the same kits? But I digress, back to the kit(s) at hand.

The Char Nagoya set consists of the clear versions of Char’s Gelgoog, Z’Gok, and Zaku II. While I’ve stated that I’m not a fan of clear Gunpla kits, the Char one’s definitely stand out, and was around 2,500 yen if I recall, meaning that you didn’t have to pay an extreme premium for the three kits. One plus I found about clear kits is that you generally don’t have to worry about sprue damage standing out so much, so this makes them a quick build. I think I did them all over the space of two evenings. Overall, the two HGUC Zaku II’s I have now are both Char’s and special editions. The Z’gok s now one of 4 I guess, if I count the enforcer along with the MG one that I have, but it’s another Zeon model that I like. Overall, I seem to be doing very good with avoiding building “regular editions”, haha. I didn’t take much in the way of pictures, but here’s what I have, so enjoy.

Ahem, a second post in less than a week?  Could I truly be getting back on the ball?  Well, poking fun at myself aside, I am planning on finally getting some of this backed up content over the next week, so look forward to it.  No really, I mean it!

Anyways, let’s get on with the Gundam talk for this month’s State of the Gundpla Union address.  First off, guys, some great responses over the HG/MG/PG rant I did last month, you all kept that going despite the fact I wasn’t around for a week or 3, much appreciated.  Today I’d like to go over a slight follow up on some of the things I talked about.

The Unicorn OVA SP Pack @ 7,875 yen – While still pricey, the updated info turns this Unicorn into a 1.5 version beast, with a ton of bonus swag.  Still a tad pricey, though.  Had they thought to included the first run novel only gatlings as well it’d be a sweeter deal.  With the OVA finally set for release this month, and with five more episodes to go, I can only imagine what comes next.  Full Armor Unicorn? Banshee?  Safe to say yes on both?

Sinanju Titanium Edition @ 12,600 yen – The price is still a freaking hell no, but I will admit nice blingy red there.  Unfortunately you’re going to pay an arm and a leg for something that’ll have splotches from where you snipped the pieces off the runner.  I’m happy with my twilight colored SInanju, thank you very much!

New to this month of I can’t believe they’re going to screw us over is the announcement of not one, but three(!) special editions of already released Perfect Grade kits!  While no pictures are yet available, the information Ngee Khiong has put up calls for a Clear version of the PG Strike (21,000 yen) along with Extra Finish versions of the RX-78 Gundam and Mass Production Zaku II (Both 23,100 yen).  Let the Gunpla 30th anniversary whoring begin!  While I can kind of see charging a premium for the “extra finish” for the Gundam and Zaku II (albeit an additional 100 dollars seems excessive), charging an additional 70 bucks for what is simply clear plastic, is simply outrageous.  I mean it’s f’n clear plastic, how much more money does that cost?  I’m going to call it, this year is going to be the year in which Bandai tries to one-up themselves each month with in over-valuing their goods new and astonishing prices.

On a side note, I will admit that I am, sadly, intrigued by the extra finish Gundam PG.  It’s the only PG that I technically don’t have, and to be honest with you, the HGUC Extra Finish version I have is really nice looking.  I think it’s a matter of how bad would sprue damage be on a PG kit.  The bigger the piece, the bigger the cut, right?

So on to the HG kits, you know, I am really finding myself pleasantly surprised time and time again.  Due to my not paying attention to what’s available in the HG line, every time I casually glance at the store I find something new.  I don’t think I mentioned this last time, but to me, one of the major pro’s of having a low cost is that allows Bandai to put out kits that they simply can’t, or won’t do in MG or bigger sizes.  In particular you’ll find a ton of Zeon/Axis/Neo-Zeon kits in the HGUC line that are variants or experimental units, or just even the regular grunts.  ESF also has a ton of kits, and I’ve got my eye on the Hazel as a potential quick build.  I did pick up just one Zeon kit the other day that I’m looking forward to putting together this weekend maybe. 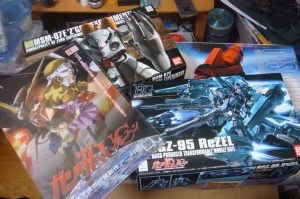 I realize that with my picking up of the ReZEL kit that I’ve gotten every Unicorn Gundam kit put out so far to date save for the HGUC Unicorn mode Unicorn Gundam.  I guess I really really like the design of the mobile suits in UC 96!  I haven’t really planned to get the Stark Jegan, but I just might now considering my line up.  One other thing I also realized I’ve done with most of the kits in this era is paint them.  While I said I was done painting, we saw what happened with my Geara Zulu, so what does that mean for the ReZEL…?  We’ll have to see!

Moving on to non-Gundam stuff, as you all know I did head back to the states for a while.  It’s always an eye opener to head back after such a long period… but as Bon Jovi said, you can always go home, so it was good to be back, eat real pizza and lots of Tex-Mex food, while snagging stuff that’s hard to get here.  That said, this time a couple of things I noticed going back to my own country.

Overall it was good, and there was a definite “twinge” coming back to Japan.  I love Japan, but the social interactions just aren’t the same…

Anyways, what are your thoughts on the Gunpla news of the day?

Kind of amazed that I whipped this up myself, but here you go. All parts were painted and I used the following colors:

I used Tamiya paints for all the colors save the Plated Silver Gundam Marker. It took about 3 hours to snip and paint, and then about 2 hours to build. I also used primer this time as I had a can left over from a long time ago, and I will say that the primer definitely made the paint look very nice with only one coat. Will have to look into priming should I paint again. I keep saying that I’m not going to paint any more and look what I go and do. Anyways, not perfect by any chance, but for jst deciding to do thison a whim it came out fairly nice.

Just a little something I whipped up today.  If Full Frontal is the new Char, then he has to have his own grunt model right?  Thusly the AMS-129FF Geara Zulu.  Will take some more pictures tomorrow.

An American Salaryman in Osaka
Create a free website or blog at WordPress.com.