As some might have see on Gundam Guy’s blog, there is a new interesting weekly serial magazine called Gundam Perfect File that has just come in Japan.  The basic idea is that every week the publisher puts out a file of info about all things Gundam, and you file it away to look up whenever you want.  While normally I wouldn’t go for such a thing thanks to the abundance of something called free information on that wonderful technical doohicky called the “internet”, I did pick up the first volume for one thing. 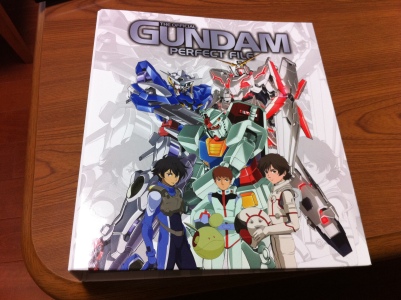 That’s right, the binder.  Usually in serial periodicals that this publisher puts out, they give you something nice in the first issue at a discounted price to suck you in.  Well, like I said, I don’t need the info, since we have the internet, but I’ll take that nifty binder.  I actually decided to pick it up for a couple of reasons.  First up, it’s only 290 yen.  Getting a nice A4+ binder that’s fairly big and sturdy, and comes with a nifty Gundam design on the cover for less than 300 yen?  Sure, why not.  Secondly, the binder comes with a really neat set of dividers, which divides the series up by timelines.

So then why pick up a binder like this all of a sudden?  Obviously I don’t have time to build anything at this moment, but one thing I have been want to do is put my MG booklets in order.  When done building the kits I throw out the runners and the box but I keep the instruction book.  You never know when it’ll come in handy, right?  Anyways, keeping track of these B5 sized booklets becomes a bit of a hassle as it’s hard to find a good B5 binder.  But with this giant binder, with dividers?  All the more reason to put things in order. 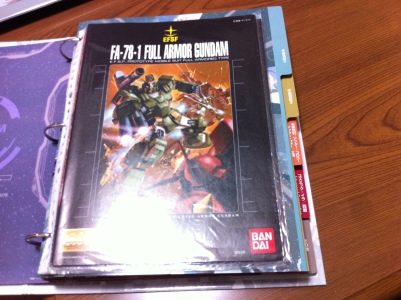 And there you go.  I actually will probably pick up another binder and divide them by UC series and everything else.  It’s only 290 yen, why not?  I’m quite pleased with how it turned out.  So then for those who are wondering, how does the full Gundam Perfect File serial work out?  Well it’s 180 issues, published weekly.  That’s then roughly 45 months or nearly 4 (!) years to completion.  The price after the first issue goes up to 590 yen per issue, for a grand total of 105,610 yen, or with today’s crappy exchange rate, roughly 1,300 dollars.
Yeah, I’m happy with just the binder.