So I finally got around to seeing the Macross Frontier movie this weekend.  This post will be spoilerific, but I’ll try and cover up the big spoilers.

First off, Macross Frontier was pretty much a hit by all standards, one needed after the apparently blah Macross Zero, and this time around Studio Nue has decided to ride the success out with not one but two movies.  The first being The False Diva (イツワりノウタヒメ) and the follow-up of The Wings of Farewell (さよならの翼).  So the general idea then that the False Diva would be a retelling of the TV show followed by a new story with the Wings of Farewell.  Unfortunately, the general idea is, well, generally off.

First off, I went into this thinking it would a retelling a la Macross: Do You Remember Love (恋をおぼえていますか？) which used the idea that you were watching the events of the TV series out in a movie, while similarly doing a Zeta Gundam Movie thing with mixing new footage with TV footage.  However, this was not quite the case and overall I came out somewhat less than satisfied overall.  The movie is not a strict retelling of the events of episodes 1-26, but more episodes 1-6, followed by a pretty vast departure of where the story goes next along with picking up various plot points from the show.

So, up next may be what some consider spoilers.  For the obvious spoilers you’ll have to highlight to read.

Obvious changes are made to facilitate the move to a movie format.  Ranka, Alto, Luca, Micheal are already friends, but Luca’s love Nanase is nowhere to be found.  Ranka’s already got a thing for Alto, but Sheryl gets much more time with him then Ranka does.  While the movie starts off with the concert, this segues into the Vajra making their first attack which for the most part mimics the first couple of episodes.  This time around Sheryl is also thrown into the mix, to help Alto get her earring much earlier.  After this first major battle, which admittedly sounds awesome in a theater, we get the character development points.

My main rant/dislike, I noticed this with the goods that they have at the movie theater as well as general advertising, but they really really over sexed the characters I think in the movie.  Ranka not so much, but Sheryl, I don’t call it fan service, but kind of almost disturbing, at Sheryl’s concert, part of her show is her potraying a Good Sheryl and Bad Sheryl, in which Bad Sheryl is pretty much, lesbian action lets go.  I kid you not, from neck biting like a vampire to actual Bad Sheryl kissing Good Sheryl .  Queue thong/g-string Shery outfits as well to make it seem a little, well, hmm, overboard?

This next hour is pretty much mecha free, and honestly kind of plodding.  Alto goes out with Sheryl, Ranka sings the carrot song, etc etc.  Good points this time around is that they show more of Ranka struggling to get started so having to sing a variety of commercial songs. Finally we get around this whole shuffling of plot points to get to some more action, which ends up being the final half hour of the movie.  This time around as Sheryl is giving her Revenge Live (As it was cut short due to the fight in the beginning of the movie) we get word that the Galaxy fleet is being attacked.   So rather than the Quarter being ordered to go help, Sheryl instead buys the SMS’s services, and they go off to the rescue.  Again, queue singing along with battling.  Of course Ranka sings along which creates that fold wave (which doesn’t get explained at all this time)  and accidently attracts said Vajra fleet fold back to where the Frontier fleet is and queue final battle.

Basically it ends up we have the two girls singing, Brera showing up to help, along with Alto and Ozma flying around defending them while the Battle Frontier pulls a Yamato and blasts the Vajra battleship.  And that’s it.

Oh, and a small preview of the next movie, which while it looks to be new, will probably try to cram in the latter half of the TV series somehow into 90 minutes.  Maybe they’ll kill Michael that time around.

This time around Grace, while seeming to be pulling the strings as before, helps out in the end, Leon doesn’t seem bad, and yeah, Michael doesn’t die, even though they make it seem like he does for a second.  Of course, Klan showing up and crying doesn’t mean much since they didn’t make a point of their relationship at all.

Overall, it’s not bad, but it felt like they focused a little too much on Sheryl using an unneeded amount of sexuality, and had a poor balance of what makes Macross bad ass, the Mecha.  Show up for the start, sleep through the middle, enjoy the end kind of thing.  The quality of animation was decent, and it looks like they upped the quality on the CG for the mecha, so that was a plus.  Still the end battle was good, but I think I like the 12 minute medley version that was done at the end of the TV series.  Something to look forward in the next version.

If anyone else out there has seen it, what are your thoughts?

We take a brief break from our regular Gundam posting to talk about Macross.  As I’ve mentioned before, Macross was actually one of the first series featuring bad ass robots, (Although I guess Voltron is technically my first) and has always remained my favorite.   Still, I’ve not really looked into building model kits until the recent Macross Frontier.  Despite dips in animation quality in some episodes and a basic recycling of the enternal Macross love triangle meets music meets transforming robots, it still provided good action, music and was enjoyable overall.  Anyways, the TV series finished last year, but announced that a full feature would be in the works.  That full feature is coming out next month, and being the fan that I am, I decided to pick up a pre-sale ticket. 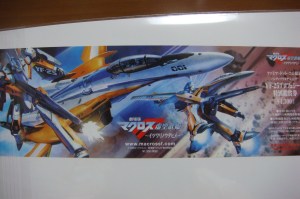 Now, I’m a sucker for limited things, so rather than just by any old ticket it, I decided to get the ticket sold only through Family Mart in Japan, that comes with the YF-25 Prophecy model kit.  YF-25 Prophecy is apparently the prototype for the YF-25 Messiah that is used throughout the TV show. 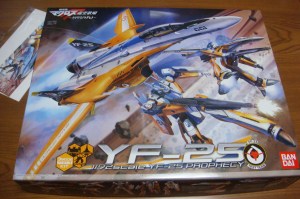 The box is actually fairly neat as it comes with a full color bottom, which is something I’ve never seen on any other plastic model boxes. 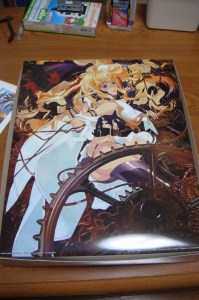 Comes with the standard Macross instruction manual and your choice of using either water slides or decals.

So considering I haven’t finished my YF-25 Messiah kit, I’ve found myself in position of yet another variable fighter to build.  Still, looking over it, it should be a fast build, should I sit down to do that.  Still, we come back to the matter of time, as I’m trying to finish up my Sinanju photo’s, move along with the Hi-Nu Gundam Fall Project, and that we have Kshatriya dropping next week.  Still, expect a WiP when I do decide to start building this kit.

Any other Macross kit builders out there?  Not limited to just Bandai, but Wave or Hasegawa?  It seems the only changeable variable kits are the ones put out by Bandai, but I’ve always wondered on the quality of other makers kits…  One on my horizon is the 1/100 Monster to be released by Wave.  If there’s any opinions out there, I’d love to hear them.