This post will wrap up the Victory Gundam here at ASM.  These are the pictures taken when GaiGun and I met up in Akiba after we finished our build.  I hope you enjoyed all the Victory goodness over the last month.  Next up is further followups on the Unicorn GBP.

So, here are the final official photo shoot pictures of the Victory Gundam along with the final thoughts on the kit. 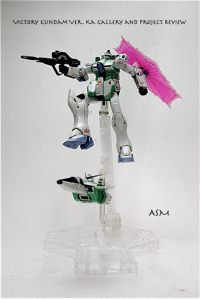 First off, paint, just to clarify again, I used the following colors:

Other touches including painting the helmet and gun sensors with a dab of metallic green Gundam marker, followed by covering it with aurora stickers.  My aurora stickers is a clearish pink style, so the green underneath seemed to give it more “color” so to say.  For the Hexa head, I actually covered the whole eye section with an aurora sticker, to give it more of a “visor” style, similar to the GM grunt line.  The Victory head I cut squares to go over the eye sections.

The build in itself was fairly easy, aside for lots of smalls, and the need to build two core fighters.  After painting was done and initial parts built, I panel lined and applied decals.  As for my opinion of those, you’ve seen that already in my decal hell post.  Again, I look at it now, and I feel like it’s a bit of overkill.  But I seemed to be afflicted with a do all the decals or do none syndrome, so there you go.

Lastly, I finished off with a healthy top coat of pearl gloss over everything.  I’ve not been the biggest fan of glossy finishes, but I find that Tamiya’s gloss coat comes off much better than Mr. Hobby’s Gloss Top Coat.  Mr. Hobby still makes the best flat coat out there though.

And so what are my thoughts?  GaiGun and I actually compared notes yesterday in Akiba, and we both agreed on the surprisingly (or not surprising?) lack of poseability.  Now, the fact that you can do all the transformations is a good point, but on the other hand, parts don’t really stay in their place like they should.  In particular, the legs pop on to the waist ball pegs things, but you really don’t get that feeling of “snap, it’s in there” and so they fall off rather easily.  On my kit as well, the upper arms tended to literally pop off the shoulder, and you can quite notice that they don’t sit as tightly together as they do on GaiGun’s kit.  This is obviously for the transformation gimmick however, so I guess you have to give and take in certain areas.  Still, it’s kind of frustrating to try and prop things up for any kind of picture outside of them just standing there.

Again, one thing we also agreed on is that the engineering for this is amazing.  As noted by several of our commentators, the Victory is literally HG 1/144 size, packing the MG quality build. But again, as neat as it is, to be honest,  I’m not a fan of the Victory’s separate forms to begin with.  Flying arms with a gun is one thing, but flying legs?  In a sort of twist, I found myself liking the Hexa head more than the Gundam head, and will be displaying my Victory in Hexa Mobile Suit mode along with the Gundam head core fighter.

Overall though, in regards to my Victory Gundam, while not a perfect paint job, and that I think that I prefer more “solid” kits (The Sinanju is a great example of a solid kit), this was a fun kit to build, and I’m extremely pleased with the results.  For those who may be interested in seeing good engineering in a small size, along with volume in a kit, in the fact that you can build not just the Victory, but the Hexa version if you want, then this is a good kit to pick up.

A large part of that comes from the fun of doing a collaboration build with a friend, and that’s what really made this kit great.  I hope you all enjoyed the shots, and as you already know, questions, comments, praise, and all always appreciated.

Lastly, I highly recommend that you check out GaiGun’s final post regarding the Victory Gundam as he goes through the transformation process with his Victory, braving paint scratches and lost decals to give you the full review.

More Victory Gundam shots for you! Here’s gallery 2, with more in a could of days.

ASM and GaiGun are proud to present the finished products of our first collaboration.  Without further ado, we present to you the results of the Victory Gundam Ver. Ka Duo Project! 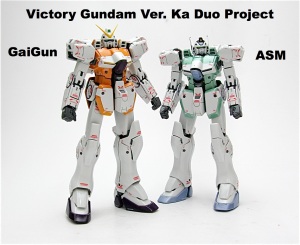 Of course, that’s one shot of many.  GaiGun will have the specifics of his colors on his blog, but for mine, I went literally all Pearl colors.  You’re seeing Pearl Green with a Pearl Light Blue, with touches of Metallic Black, all covered with a Pearl Gloss finish.  I’ll cover more of the specifics in upcoming posts, but first I have to thank my partner in this project for going above and beyond in taking a ton of great pictures.  The gallery today is the first of at least two galleries of photos taken by GaiGun, finishing off with the gallery of informal shots we took in Akiba.

But who wants to read text?  Here’s a bunch of pictures for you to check out.  Comments, thoughts, and questions are always appreciated!

You can call this one built, painted, decaled, and DONE. 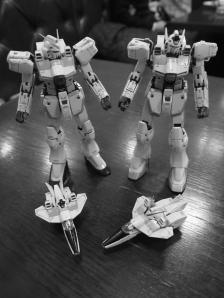 GaiGun will be taking these off for the photoshoot, look forward to it. In the meantime, get ready for….

As the title of this post clearly states, I’m currently knee deep in decal hell.  To quote a mail I sent to GaiGun earlier.

So, I vote we track down Katoki down and beat him within an inch of his life with a giant, heavy stack of decals.  I reaaally think the man put on a f***load of decals just because he can.  what a c***. /end katoki rant.

Yeah, Sinanju is easy compared to the Victory in terms of decaling.  Not only is the Victory obviously smaller in size, it makes said decals even smaller, and to top it off there are more than the Sinanju.  My cohort in this affair has a much nicer post regarding this issue than I do.

However, I am halfway done with the decaling, and we’re on track to finish up by this weekend.  Which means big reveal sometime in the next week or two?  Maybe, just maybe.   Of course we’ll be jumping right into the Unicorn GBP which will slowly gear up into speed from mid-March I think.