Before you know it, it’s the end of the month again (give or take a few days….^_^:;) November ended up being quite a bit busier than I expected on the real life end and quite a few factors kept me from the website and Gunpla.  But let’s get on with the how things are in the state of the Gunpla Union.

First up, as I mentioned last month, my PS3 bit the dust and I sent it off for repairs in hopes that they wouldn’t have to do anything that would involve wiping my hard drive and nearly 4 years of saves.  Unfortunately, that was not the case, so rather than having them fix it, I opted to have it returned and will attempt a fix myself in order to try and save my data.  But considering there is a chance that I’ll screw it up, I went ahead and picked up a new PS3slim, and have immediately been sucked into Black Ops, especially now that GaiGun himself is playing.  Nightly matches of domination and Zombies means less time for website, gunplay, or sleep at this point.  Of course, add in my back log of Assassin’s Creed, Castlevania, Medal of Honor, DJ Hero 2, and the upcoming Gundam Musou 3, and I start debating skipping sleep all together…

Other than that, I’ve also been shuttling back and forth to Tokyo for projects and work on a weekly basis, and that has actually been cutting into my weekends.  Again I’ll be in Tokyo for this week and next weekend for work, but I’ve secured time to meet up with my drinking partner, Gaigun, in Akiba.  Now that I think about it, we’ll be meeting up on the day of the PG Strike Freedom drop, so we’ll be able to see firsthand how popular it is.

So unfortunately, it looks like things are going to be a bit busy for me in December as well, between work, gaming, and the Japanese penchant for end of the year parties (I’ve already got 5 on my list..)  So I guess I need to forgo not only sleep, but my liver as well….  But, onto the Gunpla stuff!! I actually did manage to finish a few kits in the first part of November, so all that’s left is photos.  I also did manage to get some new kits so I guess that puts me at plus/minus zero for the month…  First up, some completed things (and upcoming (truly, yes, I will do this) photo shoots) include the following kits.

And a bit of orange to go with that black

Yeah, I jumped on that bandwagon too (and hand painted the gold at that)

While I finished the above, I still have the MG ReZel that I’m working on with the folks at the GAF GBP thread.  Currently I’m exactly where I was last time, with the legs finished, and all the other pieces snipped out.  I just need to paint, and do so light after market parts work.   The goal is to get this done in the next couple of weeks if possible.

So why do I want to get this done?  Well, the major reason is that the PG Strike is dropping in less than two weeks, and I’m ready to jump on it.  PG’s definitely take time though, so I want to clear off my work table of all current kits before I dive into that monster.  Of course, there is a couple of other small kits I want to try and squeeze in there if possible.

Selling like hotcakes, and for some reason, I want to build this more than the RG Gundam… 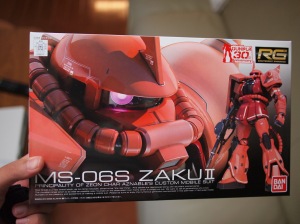 More (or is it less since it’s Mini?) Hoi-hoi

And yeah, I went there.

Honestely, I like the box art for the Linkin Park HG kit.  I think because it’s more of the realistic portrayal of the members more than anything else.  But that’s my current gunpla status.  The main goal in December though is to get the photo shoots for all the done kits out of the way, finish the ReZel, and jump into a WiP for the PG Strike.  What’s on everyone else’s plates this holiday season?