When the urge to build calls, it must be answered!  And it called me to do a quick snap build of the Extra Finish Version of Char’s Z’Gok.  This version is a gentei kit from the 2007 Character Hobby Show, and I picked it up in Akiba this summer before moving to Osaka.  Since it’s an extra finish version, this will be a simple snap build, as panel lining and what not tends to have adverse effects on extra finish parts.  So lets jump into the build!

Just looking at the above parts and I can see that while the silver will have some nub damage that will be visible, the red and pink parts may hide it better.  We’ll see as we go.  The build looks to be fairly straight forward and simple, especially when you consider that the torso and head is pretty much all one big piece.  Having build the HGUC version, I wasn’t sure how the gimmicks would work, but there are a couple.

The parts for the torso/head/upper body thing.

The flaps on the front are movable on the MG, so I guess that is to help signify the vents used while underwater. The mono-eye, while movable, doesn’t link up to anything like the Zaku-II, so you have to take the top off to position it to your liking.  While we are at it, let’s put together the back tanks.  It’s interesting to note that while the outer armor is extra finish, the black pieces are done up with a light pearl glitter too.

Moving onto the arms, one big difference from the HGUC is the usage of soft rubber piping to help accent the arms.  This also allows you to shrink and extend them as well.  An interesting gimmick and helps you get a little more out of this kit than the HGUC version.  Another point of interest is, that while not pictured, it comes with the option of creating 4-clawed hands as opposed to 3-clawed hands.  I don’t recall seeing a 4 claw version, so I went with the tried and true 3 claws. 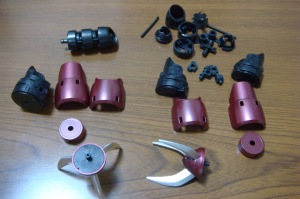 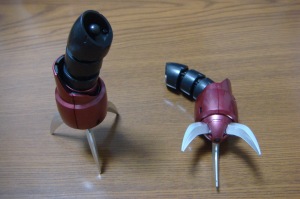 Today we get about halfway done with the kit.  I’m taking it slow as I don’t want to cause extra damage on the color parts, but surprisingly enough, the nub damage doesn’t jump out as much as one would think. That is, aside from the silver parts.  I’m finding that to be a great thing, as this finish looks really good in these colors.  Too bad they can’t do the same for silver and gundam colors!