Slowly starting to settle down with things, and move into the job hunting phase.  Still, I have plenty of time on my hands, so I need to finish up some things.  Rather than do separate posts, I’m just going to do some status updates on things here.

First up, my progress on the Unicorn Gundam for the Group Build.  All the pink parts have been painted, the white parts are all snipped out, all that’s really left to do is the flat coat followed by decaling, among some other things.

Still got those skinny legs.

As most people figured out, I did pick up the MG Wing Gundam, and decided to use up the rest of those pearl paints I had picked up.  Nothing fancy, but I’m pretty pleased with how it’s looking.

I’ve also finished the PG Gundam.  I will do a write up in the near future, but I have to admit, I was pleasantly surprised with the build, despite being a very old kit, the internal build is very solid, and a quick build.  The extra finish version is quite nice to look at… from a distance.  The fear nub damage is there on some parts… but that’s for a post in itself.

I’ve been here, there, and everywhere over the last few weeks.  I have picked up a few things, like finally finding a 1/144 Kapool from Turn A Gundam, and at the super low price of 200 yen at that.

I also entered the Victory Gundam in a Gunpla contest being held by Asobit City.  It was on display for the last two weeks, along with others, for the public to vote on.  While there are quite a few people that are way better than me, it’s still a nice feeling to be able to enter contests.  You all have already seen my Victory, so here are some pictures of the other kits on display. 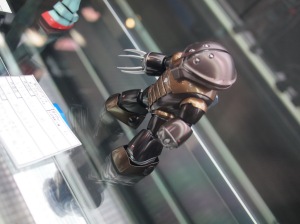 They should be announcing the winners over the next week, so we’ll see how it goes.  Also, as things settle down at home, things should pick up here.