Just a few things I thought I’d put in one post.

First up, as some of you may recall, I covered Nissin’s Cup Noodle campaign with Bandai that featured the world’s smallest Gunpla.  Well part two of that campaign kicked off on Monday, which was a Char specific cup with refillable noodle packs.  While the noodles don’t get ready 3 times faster than they normally would, the cup in itself is neat.  I actually love the packaging on this one, as they have a giant quote of Char’s in English on the top.  Somehow it comes off much… cooler in English.  “Don’t take it personal Garma, You can thank your father for this” cold blooded man.

The top, all in English 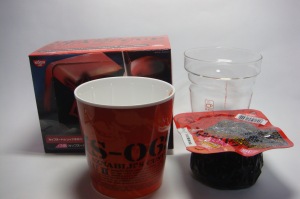 This runs about 10 bucks which gets you the glass and one noodle packet.  Haven’t actually eaten the noodles yet, that’ll probably be tomorrow.

Next up, a first that will suprise many.  I actually got some Gundam tools from… America!

The tools in question

You’re looking at 5 Gundam Markers, the Plated Silver (Mekki Silver in Japanese) that Lupes at It’s a Gundaaaam was kind enough to send me.  The reason being?  Well, the plated silver Gundams are probably one of the most useful markers out there due to the fact they look really good! And can be used for vital things such as pipes, weapons, and more importantely, trim on Katoki kits such as the Sinanju and Kshatriya.  So why get them from America?  Because they’re no longer made!  Amazingly enough, I totally missed out on this news, but apparently they stopped making them for some reason or another around January of this year, and by the time I started looking around, the stock was all gone in Japan.  I was told even in Akiba that people pretty much bought them by the box once the news was out that production was stopped.

So, for those interested, your best bet will be to get them from a foreign supplier, as Japan doesn’t have anymore!

Lastly, you may have noticed something in the first few pictures, mainly a white background.  There are two reasons for this. 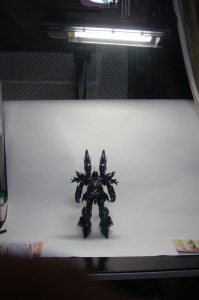 I finally got a new light, the old one just wasn’t handling it, of course that’s what I get for buying a really cheap light a year ago.  This time I went middle of the road (which isn’t saying much, because lights are freakin expensive here!) and got a nice work lamp.  I also invested in a giant sheet of paper, this I bought at the 100 yen store, a movie poster sized piece of paper.  Combined with the light, I should be able to take much better shots!  Just to give you an idea…. 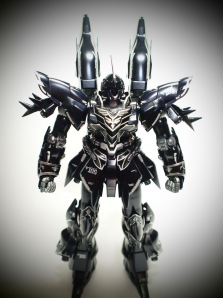 Checking out the thrusters 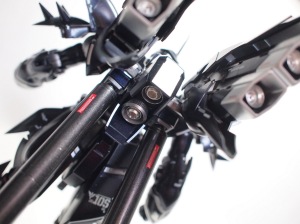 Finally getting that blue to pop

Now I have little excuse to actually finish taking good shots of the Sinanju, and officially closing the book on it.  Save time that is…